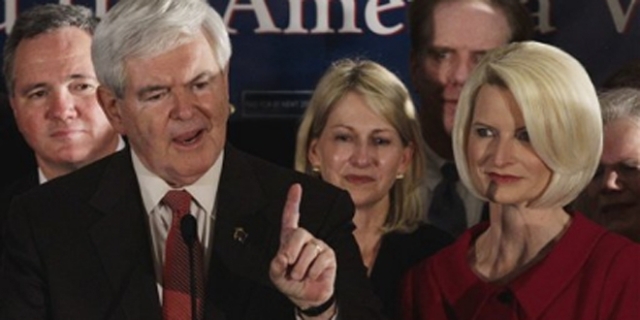 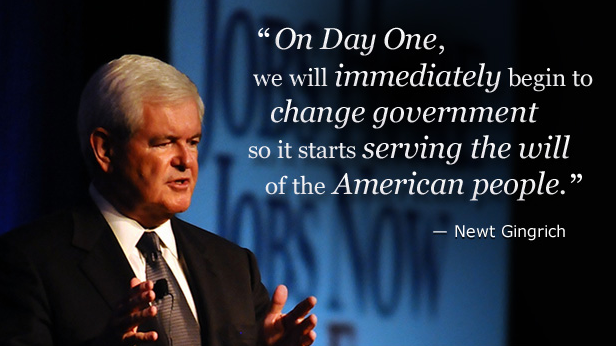 Newt Gingrich resurrected his campaign Saturday with a stunning victory in the South Carolina Republican presidential primary, leveraging strong debate performances and a handful of wrong turns for Mitt Romney to surge past the former frontrunner and reset the race which is now headed for Florida.

After claiming his first primary win, the former House speaker rallied supporters on the road to the next contest on Jan. 31. Gingrich, looking to convey the image of a general election candidate, focused his victory speech almost entirely on President Obama, unloading some of his toughest criticism to date on the White House incumbent.
Related Video

Romney: ‘Still Got a Long Way to Go’

Ron Paul: ‘We Will Continue’

“He makes Jimmy Carter look strong,” Gingrich quipped at the close of his speech.

Gingrich faces organizational challenges going forward, but he said Saturday: “We don’t have the kind of money at least one of the candidates has, but we do have ideas and we do have people.”

Gingrich locked up a decisive victory in the state. With 100 percent of precincts reporting, Gingrich pulled in 41 percent of the vote, to Romney’s 27 percent.

Rick Santorum finished in third with 17 percent, followed by Ron Paul with 13 percent.

The leader board virtually ensures a drawn-out Republican race, a turnaround from just a week ago when Romney seemed poised to clinch the nomination in short order.

Romney, at his post-election rally in South Carolina, acknowledged that he sees a “long primary season” ahead and vowed to put up a stiff fight.

Gingrich surged to win South Carolina after what was arguably the most eventful week of the primary season. Rick Perry dropped out of the race Thursday, throwing his support behind Gingrich. The Iowa Republican Party dropped the surprise announcement that Santorum, and not Romney, had actually won the Iowa caucuses. And Romney found himself repeatedly struggling to answer questions — pushed by the Gingrich campaign and echoed in the media — about why he’s not releasing his tax returns before April. Meanwhile, Gingrich was able to deflect questions about allegations from his second wife that he once sought an “open marriage.”

His scorching answer at Thursday’s debate to a question on the subject may have even helped improve his standing ahead of the South Carolina vote.

In the delegate battle, Fox News projects Gingrich will win at least 19 of South Carolina’s 25 delegates. That puts him in second place behind Romney in the overall race for the nearly 1,144 delegates needed to clinch the nomination.

With a victory under his belt, Gingrich held back Saturday night on criticism of his opponents. Rather, he unleashed a tirade of criticism on Obama, describing him again as the “most effective food-stamp president in American history” and excoriating him for his recent decision to deny a permit for the Canada-to-Texas Keystone pipeline.

Warning that the decision would drive the Canadians to strike an oil deal with China, he said: “An American president who can create a Chinese-Canadian partnership is truly a danger to this country.”

Romney, who for much of the race tried to focus his criticism on Obama, signaled Saturday he will step up his attacks against Gingrich in the upcoming contests.

The former Massachusetts governor, without calling out Gingrich by name, blasted him over his government-heavy resume and his past attacks on Romney’s tenure at Bain Capital.

“They’re attacking every person who dreams of a better future. He’s attacking you. I will support you,” Romney said, adding that anyone who demonizes success is not “fit” to be nominee.

Gingrich, though, recently has tempered his criticism of Romney’s time at the investment firm — opting instead to pressure Romney to release his tax returns.

Romney aides told Fox News there is no plan “at this time” to accelerate the release, but there is clearly a debate over the topic within the campaign.

One Romney adviser told Fox News that the campaign is “happy” with the state of the race.

“You never get to the end zone without being tired and taking hits,” said adviser Stuart Stevens.

Romney’s aides had been downplaying expectations by late Saturday, acknowledging the momentum that had been going Gingrich’s way in recent days.

Exit polling confirmed his advantage among several groups of voters. Those who made up their minds late broke for Gingrich, while those who had decided early mostly backed Romney. Late deciders outnumbered early deciders 53-46 percent. Gingrich also had the advantage among voters who viewed the debates as important. And Gingrich led among those who say it’s important that a candidate shares their religious beliefs.

South Carolina has a reputation as a tie-breaker in the Republican primaries, often setting the winner on a relatively smooth course to the nomination. But Saturday’s contest only complicates things. With Gingrich’s victory, there have been three distinct winners in the first three contests.

The race heads next to Florida. There, Romney is planning to aggressively go after Gingrich’s ethics record in the House during his days as speaker and the consulting work his firm did for Freddie Mac.

In a fresh fundraising pitch, Gingrich continued to press the case that he is the “Reagan conservative” the party needs to go up against Obama.

The other two candidates said they’re staying in the race.

Santorum, speaking Saturday night in Charleston, described the contest as “wide open” and said he’s charging into Florida next.

“Three states, three winners,” Santorum said. He continued to make a working-class appeal to voters, saying he’s going to bring a “little different message” than the other candidates.

“I plan to be a little different,” Santorum said. “I’m going to go out and talk about how we’re going to have a Republican Party, a conservative movement that makes sure that everyone in America has the opportunity to rise.”

Paul, despite placing fourth, vowed to press on Saturday night. He noted that the returns suggest his campaign will have attracted four or five times more votes than it did in the 2008 race.

“There’s every reason to be encouraged,” Paul told an enthusiastic crowd. “This campaign has a long way to go.”

Herman Cain, who dropped out of the race last year, still pulled in 1 percent of the vote Saturday — though comedian Stephen Colbert had been urging voters to cast their ballots for Cain, as a stand-in for his own mock candidacy.

Newt Gingrich is the architect of the “Contract with America” that led the Republican Party to victory in 1994 by capturing the majority in the U.S. House for the first time in forty years.

Under Newt’s leadership, Congress passed the first balanced budget in a generation, leading to the repayment of over $400 billion in debt. Congress also cut taxes for the first time in sixteen years and reformed welfare, leading to over sixty percent of welfare recipients either getting a job or going to school. In addition, the Congress restored funding to strengthen our defense and intelligence capabilities, an action later lauded by the bipartisan 9/11 Commission.

The Washington Times has called Newt Gingrich “the indispensable leader” and Time magazine, in naming him Man of the Year for 1995, said, “Leaders make things possible. Exceptional leaders make them inevitable. Newt Gingrich belongs in the category of the exceptional.” 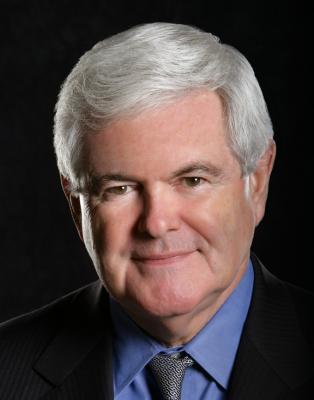 Born in Harrisburg, Pennsylvania, Newt’s experiences as the son of a career soldier convinced him at an early age to dedicate his life to his country and to the protection of freedom. Realizing the importance of understanding the past in order to protect the future, he immersed himself in the study of history, receiving his Bachelor’s degree from Emory University and Master’s and Doctorate in Modern European History from Tulane University. Before his election to Congress in 1978, Newt taught History and Environmental Studies at West Georgia College for eight years. He represented Georgia in Congress for twenty years, including four years as Speaker of the House.

Newt served on the Defense Policy Board under President George W. Bush, which provided strategic counsel to the Pentagon and Secretary of Defense on how to better address threats facing the United States. He is also the longest-serving teacher of the Joint War Fighting course for Major Generals at Air University and taught officers from all five services as an honorary Distinguished Visiting Scholar and Professor at the National Defense University. In 1999, Gingrich was appointed to the United States Commission on National Security/21st Century, the Hart/Rudman Commission to examine our national security challenges as far out as 2025. The Commission’s report is the most profound rethinking of defense strategy since 1947.

Newt is widely recognized for his commitment to a better system of health for all Americans. His leadership helped save Medicare from bankruptcy, prompted FDA reform to help the seriously ill and initiated a new focus on research, prevention, and wellness. His contributions have been so great that the American Diabetes Association awarded him their highest non-medical award and the March of Dimes named him their 1995 Citizen of the Year. 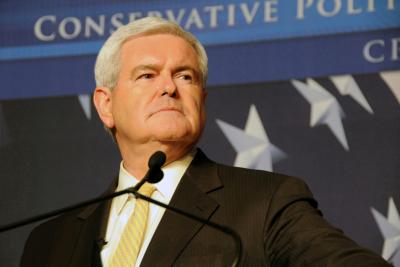 In 2003, Newt founded the Center for Health Transformation to develop free market healthcare reforms to foster a 21st Century System of health and healthcare that is centered on the individual, prevention focused, knowledge intense and innovation rich. Newt also served as the Co-Chairman of the National Commission for Quality Long-term Care and the independent congressional Alzheimer’s Disease Study Group. 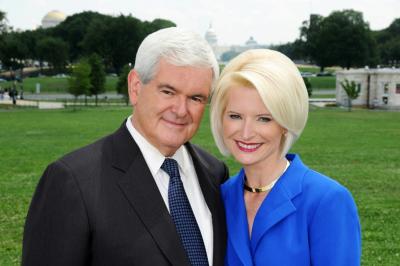 Newt and his wife, Callista, host and produce award-winning documentary films, including A City Upon a Hill, Nine Days that Changed the World, Ronald Reagan: Rendezvous with Destiny, and Rediscovering God in America. Together, Newt and Callista also author photo books and record audio books.

Newt is the author of twenty-three books, including thirteen New York Times bestsellers.